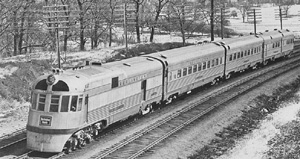 Builder: To be determined

The General Pershing Zephyr was the ninth Zephyr to join the growing fleet of stainless steel Burlington trains.  Because this new train passed near the birthplace and boyhood home of famous World War I General John G. Pershing, the train was christened the General Pershing Zephyr. The locomotive was named Silver Charger after Pershing's horse, Charger (the General first having been a cavalryman), while the cars were named for emblems of rank for Army commissioned officers - Silver Leaf, Silver Eagle and Silver Star. The three car train entered service on April 30, 1939 between Kansas City and St. Louis. It's 558-mile round trip as trains 32 and 33 started at Kansas city at 9:00 AM, arriving at St. Louis at 2:00 PM, departing at 3:00 PM for an arrival back at Kansas City at 8:00 PM. The 279-mile run included five scheduled stops and three conditional stops, allowing the train to complete its five-hour trip at an average speed of 55.8 miles per hour.

The design of this train differed from it's Zephyr predecessors in that it was totally non-articulated. The Denver Zephyr started the trend for more flexible consists by being semi-articulated, but the new General Pershing Zephyr was completely non-articulated demonstrating the popularity of the new equipment.  All too often there were many patrons left standing on station platforms because of the limited seating of the very popular Zephyrs 9902 and 9903 that had been assigned at various times to run the St. Louis to Kansas City route.  Another design innovation for the GPZ was the first use of disc brakes on a passenger train in the U.S.

The power unit for this train, although the last of the Burlington "shovelnoses," initiated some new designs. The daylight, trans-Missouri run didn't require as much power as the new Twin and Denver Zephyrs, and it didn't require an RPO, so the 9908 was designed as basically a baggage car with an engine! Due to this design, the construction contract went to Budd rather than EMC. A major problem with the motors 9904-9907 was excessive nosing of the four-axle power trucks, especially at high speeds and on track not maintained to the highest standards. the Burlington chose to equip 9908 with the new six-wheel A1A truck designed by Martin Blomberg, an EMC engineer. The A1A truck, while only having traction motors on the first and third axle, had a considerably longer wheelbase due to the idler axle, which allowed it to track exceedingly well on curves. It quickly became the standard on all EMC passenger locomotives. Perhaps most important was the use of EMC's new 567 diesel instead of the Winton 210A engine. The 567 featured 8 1/2 X 10-inch cylinders, with a displacement of 567 cubic inches (thus the model designation) and cranked out 1,000 horsepower with its V-12 design. And lastly, the 9908 utilized all-EMC electrical transmission components - generators, traction motors and controls.

As stated previously, the baggage compartment was a part of the power unit. The next car back, Silver Leaf, was a 70-passenger coach with a women's lounge in the front and two men's toilets on opposite sides of the aisle in the rear. the vestibule for this car was at the front of the car. The next car, Silver Eagle, was somewhat smaller, only accommodating 52 passengers. It had a full men's and women's lounge on either end of the car, with the vestibule in the rear. The last car, Silver Star, was the diner/lounge/observation car. The kitchen and pantry were in the front 13 feet of the car, with the 19 foot-long dining room that sat 24 passengers at six tables. The 31 foot-long parlor/lounge comfortably seated 22 passengers. the vestibule in this car was located between the dining and lounge areas.

The train operated its intended route until the war conditions in 1942 saw the train reassigned, along with many other CB&Q trains. There was a brief period in 1939 when this train was assigned to the daily round trip between Lincoln and Kansas City.

Railway Classics sets the standard for accuracy, innovation and detailÓ.